This chapter we study the conceptual and implementation aspects of network applications.

Throughput:the rate at which the sending process can deliver bits to the receiving process.

Transport Services Provided by the Internet

Today’s Internet can often provide satisfactory service to time-sensitive applications, but it cannot provide any timing or throughput guarantees.

Many firewalls are configured to block (most types of) UDP traffic, Internet telephony applications often are designed to use TCP as a backup if UDP communication fails.

The Web and HTTP

Persistent Connections:all of the requests and their cor-responding responses be sent over the same TCP connection.

Round-trip Time(RTT):the time it takes for a small packet to travel from client to server and then back to the client.

Note that each TCP connection transports exactly one request mes-sage and one response message.

HTTP server closes a con-nection when it isn’t used for a certain time.

HTTP uses cookies, defined in [RFC 6265], allow sites to keep track of users, but also be considered as an invasion of privacy.

A Web cache also called a proxy server-is a network entity that satisfies HTTP requests on the behalf of an origin Web server.

Typically a Web cache is purchased and installed by an ISP.

Content Distribution Networks (CDNs):A CDN company installs many geographically distributed caches throughout the Internet, thereby localizing much of the traffic.

Internet delay:the amount of time it takes from when the router on the Internet side of the access link forwards an HTTP request (within an IP datagram) until it receives the response (typically within many IP datagrams) is two seconds on average.

Conditional GET:a mechanism that allows a cache to verify that its objects are up to date.

FTP is said to send its control information out-of-band. HTTP, as you recall, sends requestand response header lines into the same TCPconnection that carries the transferredfile itself.

FTP maintain state about the user

Keeping track of this state information for each ongoing user session significantly constrains the total number of sessions that FTP can maintain simultaneously.

Electronic Mail in the Internet

Mail server must also deal with failures in other mail server:

It requires binary multimedia data to be encoded to ASCII before being sent over SMTP.

SMTP has TCP establish a connection to port 25.

SMTP is primarily a push protocol, HTTP is mainly a pull protocol;
SMTP requires each message, including the body of each message, to be in 7-bit ASCII format.
HTTP encapsulates each object in its own HTTP response message. Internet mail places all of the message’s objects into one message.

POP3 begins when the user agent opens a TCP connection to the mail server on port 110.

A user agent using POP3 can often be configured (by the user) to :

The POP3server maintains some state information; in particular, it keeps track of which usermessages have been marked deleted. However, the POP3 server does not carry stateinformation across POP3 sessions.

Unlike POP3, an IMAP server maintains user state information across IMAP sessions.Another important feature of IMAP is that it has commands that permit a user agent to obtain components of messages.

The e-mail message is sent from web browser to mail server over HTTP rather than over SMTP.

domain name system (DNS):a directory service that translates hostnames to IPaddresses, and some other services.

The DNS protocol runs over UDP and usesport 53.

A “nearby” DNS server:cache IP address, which helps to reduce DNS network traffic as well as the average DNS delay.

DNS provides a few other services:

Overview of How DNS Works

A simple design for DNS would have one DNS server that contains all the map- pings:

Local DNS server:When ahost connects to an ISP, the ISP provides the host with the IP addresses of one ormore of its local DNS servers (typically through DHCP).When a host makes a DNS query, the query issent to the local DNS server, which acts a proxy, forwarding the query into the DNSserver hierarchy.

In a query chain, when aDNS server receives a DNS reply, it can cache the mapping in its local memory.

Aresource record is a four-tuple that contains the following fields:

TTL is the time to live of the resource record; it determines when a resource shouldbe removed from a cache.

Inserting Records into the DNS Database

More recently, an UPDATE option has been added to the DNS protocol to allow data to be dynamically added or deleted from the database via DNS messages.

In P2P file distribution, each peer can redistribute any portion of the file it has received to any other peers.

The distribution time is the time it takes to get a copy of the file to all N peers.

BitTorrent is a popular P2P protocol for file distribution.

Many of the P2P live streaming applications, such as PPLive and ppstream, have been inspired by BitTorrent. 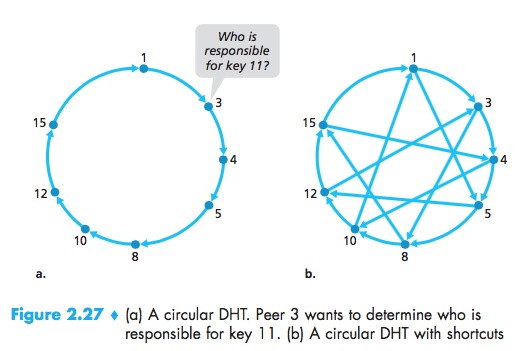 Using the circular overlay, the origin peer (peer 3) creates a message saying “Who is responsible for key 11?” and sends this message clockwise around the circle, this process continues until the message arrives at peer 12, it send a message back to the querying peer.

In designing a DHT, there is tradeoff between the number of neighbors each peer has to track and the number of messages that the DHT needs to send to resolve a single query: