This chapter presents a broad overview of computer networking and the Internet.

What Is the Internet

The Internet is a computer network that interconnects hundreds of millions of com-puting devices throughout the world.

End systems are connected together by a network of communication links and packet switches.

communication links, which are made up of different types of physical media, including coaxial cable, copper wire, optical fiber, and radio spectrum.

Packet switches come in many shapes and flavors, but the two most prominent types in today’s Internet are routers and link-layer switches.

The sequence of communication links and packet switches traversed by a packet from the sending end system to the receiving end system is known as a route or path through the network.

Each ISP is in itself a network of packet switches and communication links. ISPs provide a variety of types of network access to the end systems.ISPs also provide Internet access to content providers, connecting Web sites directly to the Internet.

But we can also describe the Internet from an entirely different angle—namely, as an infrastructure that provides services to applications.

What Is a Protocol

A protocol defines the format and the order of messages exchanged between two or more communicating entities, as well as the actions taken on the trans-mission and/or receipt of a message or other event.

End systems, packet switches, and other pieces of the Internet run protocols that control the sending and receiving of information within the Internet.

The residential telephone line carries both data and traditional telephone sig-nals simultaneously, which are encoded at different frequencies:

The DOCSIS 2.0 standard defines downstream rates up to 42.8 Mbps and upstream rates of up to 30.7 Mbps.

fiber to the home (FTTH)

provide an optical fiber path from the CO directly to the home.

Dial-up access over traditional phone lines is based on the same model as DSL—a home modem connects over a phone line to a modem in the ISP. Compared with DSL and other broadband access networks, dial-up access is excru- ciatingly slow at 56 kbps.

A satellite link can be used to connect a residence to the Inter- net at speeds of more than 1 Mbps.

Ethernet users use twisted-pair copper wire to connect to an Ethernet switch.

users typically have 100 Mbps access to the Ethernet switch, whereas servers may have 1 Gbps or even 10 Gbps access.

Wireless LAN access, provides a shared transmission rate of up to 54 Mbps.

Coaxial cable consists of two copper conductors, but the two con- ductors are concentric rather than parallel.

A thin, flexible medium that conducts pulses of light, with each pulse representing a bit.

The source breaks long messages into smaller chunks of data known as packets.

Store-and-forward transmission means that the packet switch must receive the entire packet before it can begin to transmit the first bit of the packet onto the outbound link.

End-to-end delay:Sending one packet from source to desti- nation over a path consisting of N links each of rate R

For each attached link, the packet switch has an output buffer (also called an output queue)

packet loss will occur—either the arriving packet or one of the already-queued packets will be dropped. 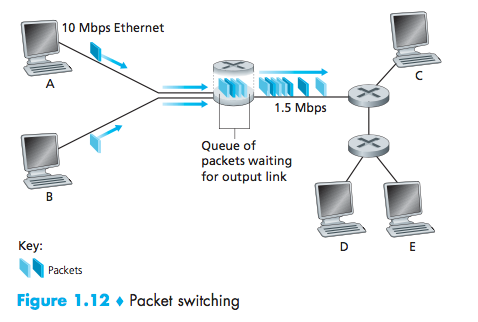 Routing protocols that are used to automatically set the forwarding tables.

The sender can transfer the data to the receiver at the guaranteed constant rate.

With FDM, the frequency spec-trum of a link is divided up among the connections established across the link.

Circuit switching pre-allocates use of the transmission link regard-less of demand, with allocated but unneeded link time going unused. Packet switching on the other hand allocates link use on demand. Link transmission capac-ity will be shared on a packet-by-packet basis only among those users who have packets that need to be transmitted over the link.

A Network of Networks

A PoP is simply a group of one or more routers (at the same location) in the provider’s network where customer ISPs can connect into the provider ISP.

Any ISP(except for tier-1 ISPs) may choose to multi-home, that is, to connect to two or more provider ISPs.

A pair of nearby ISPs at the same level of the hierarchy can peer, that is, they can directly connect their networks together.

Internet Exchange Point (IXP)(typically in a stand-alone building with its own switches), which is a meeting point where multiple ISPs can peer together.

The physical laws of real- ity introduce delay and loss as well as constrain throughput.

Overview of Delay in Packet-Switched Networks

The time required to examine the packet’s header and determine where to direct the packet is part of the processing delay.

At the queue, the packet experiences a queuing delay as it waits to be transmitted onto the link.

The transmission delay is L(bits)/R(bits/sec). This is the amount of time required to push (that is, transmit) all of the packet’s bits into the link.

The time required to propagate from the beginning of the link to router B is the propagation delay.

traffic intensity:The ratio La/R (L bits, a is in units of packets/sec, R is the transmission rate)

With no place to store such a packet, a router will drop that packet; that is, the packet will be lost.

N links, suppose for the moment that the network is uncon- gested (so that queuing delays are negligible):

The source will send N special packets into the network, When the nth router receives the nth packet marked n, the router does not forward the packet toward its destination, but instead sends a message back to the source. The source reconstruct the route taken by packets flowing from source to destination, and the source can determine the round-trip delays:

Traceroute places an asterisk just after the router number and reports fewer than three round-trip times for that router.(Further, but return faster)

End System, Application, and Other Delays

Purposefully delay:an end system wanting to transmit a packet into a shared medium.

Media packetization delay:In VoIP, the sending side must first fill a packet with encoded digitized speech before passing the packet to the Internet.

The instantaneous throughput at any instant of time is the rate(in bits/sec) at which Host B is receiving the file.

If the file consists of F bits and the transfer takes T seconds for Host B to receive all F bits, then the average throughput of the file transfer is F/T bits/sec. 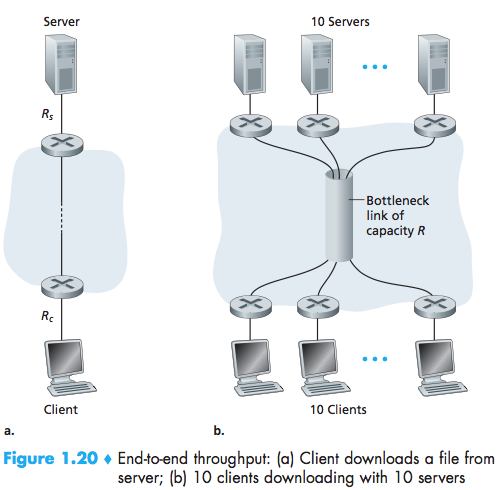 the throughput can simply be approximated as the minimum transmission rate along the path between source and destination.

Protocol Layers and Their Service Models

An application-layer protocol is distributed over multiple end systems.

The Internet’s network layer is responsible for moving network-layer packets known as datagrams from one host to another.

The link layer, which delivers the datagram to the next node along the route.

The job of the physical layer is to move the individ-ual bits within the frame from one node to the next.

The protocols in this layer are again link dependent and further depend on the actual transmission medium of the link (for example, twisted-pair copper wire, single-mode fiber optics).

Bit:A bit is moved across the link in a different way.

The role of the presentation layer is to provide services that allow communicating applications to interpret the meaning of data exchanged.

The session layer provides for delimiting and synchronization of data exchange, includ-ing the means to build a checkpointing and recovery scheme.

delimiting and synchronization of data exchange

Each layer, a packet has two types of fields: header fields and a payload field. 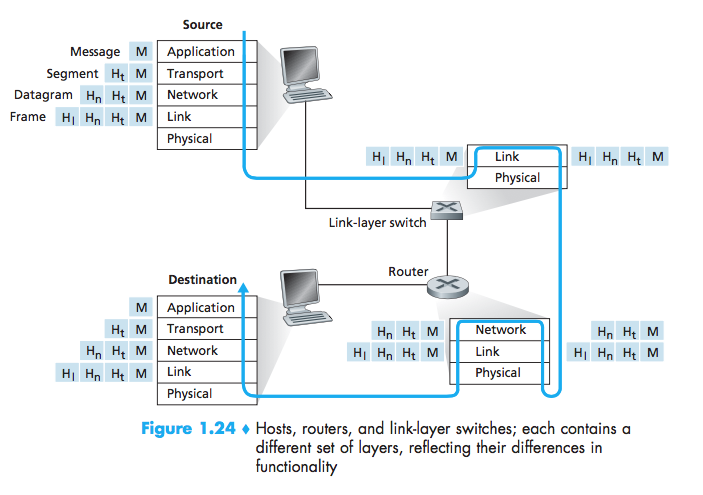 Botnet:which the bad guys control and leverage for spam e-mail distribution or distributed denial-of-service attacks (soon to be discussed) against targeted hosts.

The bad guys can attack servers and network infrastructure

denial-of-service (DoS) attacks:renders a network, host, or other piece of infrastructure unusable by legitimate users.

Most Internet DoS attacks fall into one of three categories:

The bad guys can sniff packets

Packet sniffer:A passive receiver that records a copy of every packet that flies by.

The bad guys can masquerade as someone you trust

IP spoofing:The ability to inject packets into the Internet with a false source address.

To solve this problem, we will need end-point authentication.